Buddhists for a Bigger Piece, er...Peace

The Highly Educated Peace Buddhists had a plan to make it all better. But odd changes, changes they didn't anticipate, have thrown off their feng shui. Their tranquility has been disrupted by this horrific shock. I feel for the disruption it has caused my students. It's so bad that many have had to seek professional help: 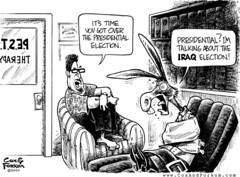 I just noticed there are no rules in the sky.
Clearly, my mind-set is a waste,
My knowledge, meaningless.
Shock and regret; also meaningless.

I think I lost myself somewhere,
Perhaps on the last corner back there.
Instead of going back to retrieve it,
I let the dog out to play.

Down beneath the labyrinth caves of the thought-world
Lies the unknown savior, intuitive awareness.
No one meets this being:
He is hidden to all.
Psychic and artist can merely sense him at a distance.

He is a killer.
He will take your life if you get near him
And that’s why you won’t
But you should.

Arms, bodies, the objects of thought-life
Lie scattered at the bottom of a canyon.
One mile up at the top of the wall
The monster of spontaneity remains unchecked.

More about Blogging in General

Last summer I wrote that blogging was going to change the world. The exchange of ideas at an exponential rate and ability to spontaneously self-publish is creating an information sharing boom. It has changed the world already and its effect will increase. It's good to check it out.

First, understand that the IM (International Media) tries to ignore blogging. That may be simply because a lot of it is quite good, and a newpaper or magazine could easily find so many superb writers and thinkers just cruising the blogosphere, not to mention writing hundreds of interesting e-publications. I know they are also jealous because the bloggers seem so free and unrestrained. There seem to be many bloggers that I believe to be people of great intelligence, clarity and compassion. I have seen some good things happen, (and bad). I have seen wise and tough people, people who see something wrong, a crack in the world, and I have seen them stick their foot in it and refuse to take it out.

Blogging has an exciting breaking edge feeling to it. That's because it's on the breaking edge (sorry) and as I said, it is an esoteic change that is powerful. At most blogs you can jump in and make a comment, like this one. And nobody gets a nickel for their thoughts, they do it for the luuv.

Who would have believed someone as entrenched as Dan Rather would be outed and obliterated by bloggers? Its a testament to a new and building electric grid of intelligent pattern. You need to know, bloggers are checking and rechecking if what the media says is true. Watch what happens. It's exciting to be in this amazing time.

Instead of watching CNN to find out about Iraq, why not read the journals of Iraqis on the internet as I mentioned. You'll get much more of a feel of things. Of course there are the fakes: One blog pretends to be from Bagdad but its just a politico from Europe trying to convince you of something.

Of course there is a ridiculous amount of garbage, inane trivia, repetition and radical nonsense on the net. Here's the thing. If there is enough discussion, truth eventually wears down the fakes. That's what's happening.

When something is off, thousands of bloggers, like little pieces of grit keep wearing away at the topic. If the topic doesn't go anywhere, it just goes away, but if there is more and more good info coming in, then it whips up into a big controversy.

For example right now there is a blogstorm beginning to brew that you might want to moniter. You might want to join the sandstorm and help wear down to the truth.
Here's the story:
The executive vice president of a major international media company has repeatedly accused the millitary of intentionally targeting, shooting and torturing the members of the media. Without evidence. Watch what happens in the blogosphere in the next couple weeks. Look it up yourself.

This paticuar story and the story of Rather is good Dharma. One correct answer is that the media has become poisoned with intellectual nihlism which give them a kind of divine right to skew the news to support changes in the world that fit their idea of progress. The people depend on the press for Info and we need the strait poop. So many of my current and old students have the exact same problem, politico/material idealism.

Nihlist idealism and desperation are not the path, this great path. They need to be understood and not embraced. Challenge yourself to learn these things.
at Monday, February 07, 2005 No comments: Links to this post

To Each and Every One

Each and everyone, striving to be happy:
May all be happy this very day.
May everyone overcome confusion:
No matter what doubts have arisen,
And sins have been committed,
May it all be forgotten
While all beings enter the sphere of great joy that never ends.

May there be fantastic fields of cheering and jubilation,
Festivals never before seen.
May fields grow bountifully
And all hearts be overflowing.

May playfulness be overwhelming
As concerns disappear.
As all beings become our friends,
May even animals lose all fear.

May all hopes become grounded in success.
In all-fulfillment may need be ended.
May all beings regardless of background or type
Endure happily in the great and simple goodness.
at Tuesday, February 01, 2005 1 comment: Links to this post

Some Favorites at the Dog Zen Koans: